The Turin Prayer Book
The splendour, illuminated by Jan van Eyck, of the international Gothic period 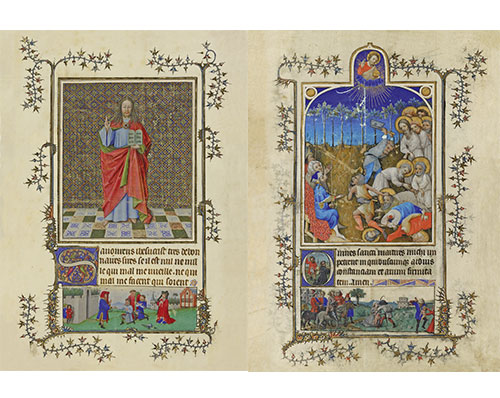 Period/origin: 1389-v. 1450. Paris, The Hague, Bruges. Around 1412, the Duke of Berry divided one of his books of hours into two parts and gave the first, now entitled Les Très Belles Heures de Notre-Dame, which was completed, to his treasurer, Robinet d’Estampes. The other part passed from his hands to those of the House of Bayern-Holland and then to the Duke of Burgundy, Philip III the Good, who had the illustration finished. In the 17th century, it was found in the collection of the House of Savoy. The Duchess Christina of France divided it up again. The first fragment, known as the Torino Prayer Book, was donated to the National Library of Turin in 1720. The second fragment was acquired by Prince Gian Giacomo Trivulzio of Milan around 1800. It was called the Milan Missal and came to the Civic Museum of Turin in 1935. The Turin Prayer Book was almost completely destroyed in the fire at the National Library of Turin in 1904, and now Patrimonio Ediciones is acting as a patron, taking charge of its ambitious and complex reconstruction, restoration and reintegration of the 4 folios in the Louvre and in the Louvre.
4 folios from the Louvre and private collection.

Illustrations: 13 full-page miniatures, which in turn contain 13 historiated capitulars, plus 13 refined bas-de-page scenes, all illuminated with gold and silver leaf. 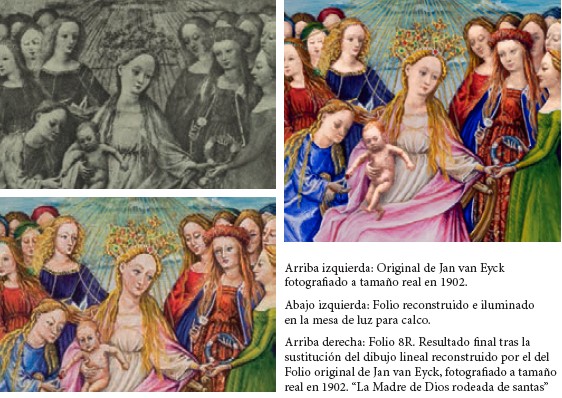 TO ACT AS A PATRON OF THE ARTS BY COLLABORATING IN ITS COMPLEX RECONSTRUCTION.

For the realisation of this project, which began more than 15 years ago and has a budget of 3 million euros, a multidisciplinary team has been set up, comprising the most prestigious experts in the art of painting and miniature illuminated manuscripts. It is based on the project for the reconstruction of Les miniatures de Jan van Eyck revisitées, the Torino Prayer Book, published in Art de L’Enluminure, a journal which includes the following scientific team, among others: François Avril (Conservateur honoraire au département des Manuscrits de la Bibliothèque nationale de France), Albert Châtelet (Professor honoraire à l’Université Marc Bloch de Strasbourg), Jim Marrow (Professeur à l’Université de Princeton). This restoration has been carried out for more than 15 years by an expert group of restorers, illuminators and researchers, professional scholars specialising in van Eyck, including María Paz González and María Navamuel, who are illuminating the damaged folios by hand from the original drawings by Jan van Eyck’s own hand.

We invite you to recover a lost treasure of universal art illustrated by Jan van Eyck by subscribing to the patronage contract in which you collaborate in the exciting, ambitious and complex project of reconstruction, restoration and reintegration of this precious codex. In addition to your participation in such a noble aim of recovering a lost treasure, in gratitude you are guaranteed the delivery of an original facsimile copy of the unique, small, limited world edition. Subscribing patrons who participate in this project will be listed in a Gratulatory Table attached to the copy, and will also be guests of honour at the memorable international presentation events. 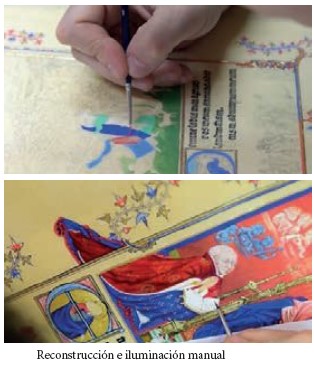 Its illustrations are of such quality, attributed to the Dutch Jan van Eyck and probably to his elder brother Hubert, artists who together started the famous Ghent Altar – the most coveted and stolen work in the history of art – completed in 1432, that they consolidate the fame of the Turin Prayer Book and its artistic status to the point of making it one of the masterpieces of the West.

The aesthetically imposing and revolutionary quality from the historical-evolutionary point of view. There are depictions of interiors of unparalleled intimacy, of great virtuosity in the reproduction of the canvases and of unusual daring in the lighting carried out by means of an invisible light source. Above all, there are landscapes which take this genre of painting to a completely new level and which already evoke the landscape painting of the 17th century: twilight landscapes, atmospheric perspective and environmental effects. All this constituted a revolutionary new approach to art, carried out first in the intimate medium of illumination and its refined contemplative atmosphere, but then strongly influencing European monumental painting in the years to come.

The composition is the same for all the folios of the manuscript: a miniature in large format, below it a figurative capitular that introduces a couple of lines of text in Gothic script and below these, again, a bas-de-page: a small secondary miniature at the bottom of the page. All the elements are framed and linked by delicate ornamental borders.

AN EXCEPTIONAL EDITION THAT WILL BE A MILESTONE IN THE HISTORY OF FACSIMILE REPRODUCTIONS.

The fascinating adventure of this book of hours begins at the court of Prince Jean de Berry, an art-mad patron of the arts, considered the greatest patron of the Gothic arts. Around 1390 he commissioned the creation of a book of hours known in the art world as Les Très Belles Heures de Notre-Dame. The miniaturist commissioned at the time was the Master of the Parament de Narbonne. We do not know why the duke exchanged the unfinished book for another work by his treasurer Robinet d’Estampes before 1413.
Subsequently, it is believed that Robinet d’Estampes sold the book of hours in parts. Consequently, the volume with the special prayers for saints, as well as a part of the missal, which is unusual in the genre of books of hours, went to a member of the count’s house of Bayern-Holland, who added new miniatures by the van Eyck brothers.
by the van Eyck brothers.
This person was suspected of being the figure depicted on folio 7R: a horseman on the beach surrounded by his retinue and a group of ladies. It was thought to be William IV, who died in 1417, or his brother John. In the first decorative project of Les Très Belles Heures de Notre-Dame”, a master, recently identified as Jean de Orléans, who got his nickname from the grisaille painting preserved in a silk curtain of the altar of Narbonne cathedral, now in the Louvre, played an important role, as mentioned above.

3.000.000 € INVESTED IN THE RECONSTRUCTION OF A LOST TREASURE OF UNIVERSAL ART.

The original manuscript of the Missal Book of Hours of Turin-Milan was bound in two volumes kept in the National Library of Turin Ms. K. IV. 29, Prayer Book of Turin onwards, and in the Civic Museum (Palazzo Madama) Ms. 47, Missal Hours of Milan, respectively. The ambitious patronage project carried out by the Patrimonio Ediciones team includes the reconstruction, restoration and reintegration of the manuscript held in the National Library of Turin, catalogued as the Holy Grail of illuminated manuscripts. 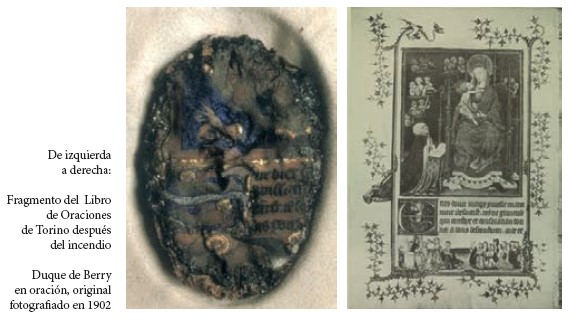 The National Library of Turin has authorised us to use the surviving life-size black and white photographic images of the manuscript of the Turin Prayer Book taken in 1902 just before the fire that almost completely destroyed it in 1904. The codex was illuminated by Jan van Eyck and his workshop. Patrimonio will produce a unique, limited and numbered facsimile edition of the reconstructed and restored illuminated folios by Jan van Eyck from the Library of Turin, to which the four folios from the Louvre and the folio in the possession of the Getty Museum are reintegrated. The five folios in these two museums were removed in the 17th century, before the manuscript was burnt.

The location of the Getty folio was unknown until just over a decade ago, when it was discovered at an auction where the Getty Museum bid $1 million for this single folio of “Christ blessing”. Today, the original codex has its pages badly damaged, with only a few centimetres of them safe.

Some of the world’s most important museums and libraries are collaborating in this reconstruction, restoration and reintegration project, including the Getty Museum and the Louvre.
There is a project to present the faithful facsimile edition together with the folios of the original restored manuscript, which is expected to be attended by the highest representatives of Italian culture and politics, as well as representatives of prestigious international museums, in the city of Turin.
There is a favourable predisposition to extend this same exhibition to the Getty Museum, the National Library of France, the National Library of Spain and other prestigious museums or libraries.