First National Award to the Best Edited Facsimile
The Bible moralisée of the Limbourg brothers
768 Illustrations. The Masterpiece of the Limbourgs with the Greatest Number of Illuminations 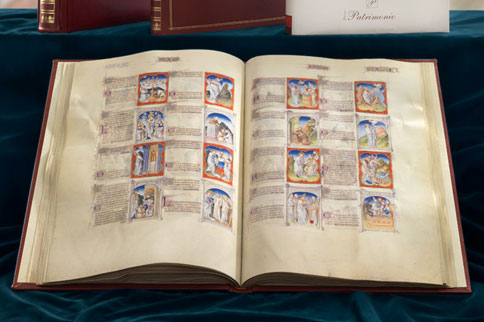 Illustrations:
513 miniatures illuminated with gold and silver by the Limbourg brothers, and 255 illustrations by Jean Fouquet and other outstanding artists.

• Bound in red leather with gold ornaments and the arms of the French kings whose court library in Blois it entered during the reign of King Charles VIII.

• The back story to this edition dates from the late 1990s, when I first had occasion to consult the Western manuscript holdings in the Grande Réserve of France’s Bibliothèque Nationale. Accompanied by our publications director, Ana Docavo, we had come to determine if it would be feasible to undertake the facsimile publication of several of the illuminated codices that figure among the library’s holdings. Foremost among the candidates was the Ashburnham Pentateuch, which has recently been issued by this firm in a most splendid edition, and another manuscript, which is catalogued as français 166. While François Avril, at that time head of the department of manuscripts, allowed us to examine these codices, he emphasized that they were among the library’s greatest treasures and making them available as facsimiles would reap unstinting praise and recognition from both the academic world and from art lovers in general. It is scarcely necessary to say that his counsel was taken very much to heart.

• The greater part of these illuminations are credited to the celebrated Limbourg brothers. It is one of their earliest masterworks, the one with the greatest number of illuminations and the only one that – for purely technical, conservation – related reasons – had not yet been reproduced in facsimile, despite the many proposals that have been put forward over the years.

• Its history begins around 1402 when the Limbourg brothers entered the service of Philip the Bold, duke of Burgundy, brother of Jean, duke of Berry and of King Charles V of France. Largely thanks to his exquisite taste, refinement, passion and experience as a patron of the arts, we might venture to say that Philip played the role of talent spotter in the “discovery” of Herman, Paul and Jean de Limbourg. The duke of Burgundy commissioned them to illuminate the present Bible moralisée, in which Holy Scripture is exemplified and its moral significance made clear by means of illustrated medallions and an accompanying explicatory text.

• Their illuminations amount to by far the most ambitious attempt ever undertaken to interpret the Bible by means of illustration and explanation. The facsimile at hand reproduces the first six volumes – the really attractive ones. The experts’ consensus, with which we entirely concur, is that the remainder of the work is of no artistic interest whatsoever.

• I must express my gratitude to the current head of the department of manuscripts, Thierry Delcourt, for his invaluable assistance, support and confidence in our publishing venture and in myself, personally, in undertaking the facsimile publication of this work. I am indebted to his passion for art, along with a desire to see that the Limbourg brothers receive the full recognition they so richly deserve as geniuses of the international Gothic style.

• First National Award for the Best Edited Facsimile for Patrimonio Ediciones. Decision of the Spanish Ministry of Culture. 05/17/2011.