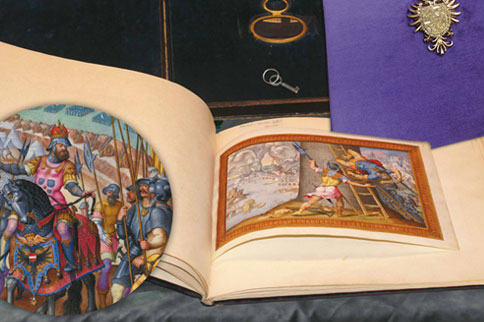 • Commissioned by Philip II of Spain to Giulio Clovio, one of the most prestigious artists of this artistic genre. His work was admired and respected by kings, courtiers, cardinals, humanists and ambassadors. His fame in Spain during XVI and XVII centuries was similar to that achieved by the great masters of painting. Pacheco said about him “he is the best illuminator I have ever known”. Among his best known works are the Atlas of Charles V and the Farnese Book of Hours.

• Charles V is commonly considered a great ruler, if for no other reason than that he could state that in his realm the sun never set. Twelve of his victories are the subject of a series of luxurious miniatures.

• The mighty deeds of Charles V exalted as political and military triumphs in the miniatures include events casting dark shadows on the emperor’s fame.

• In December 1815 it was purchased from a Monsieur Trochon of the rue Caumartin in Paris by Samuel Woodburn, London; before 1817 it was sold to Thomas Grenville; after his death in 1846 it was received by the British Museum as part of the Grenville Library, 1847; transferred to the Department of Manuscripts of the British Library in 1890.

• The British Library gave us the exclusivity of the rights of exploitation for its faithful fine facsimile reproduction, and the exclusive authorization to contrast the proofs of the pre-printed folios with each page of the manuscript. Then, in our artisan workshops we have to make the colour adjustments and corrections on the latter proofs, until reaching the identical tones contained by the rich chromatic scale of the codex and the exact reproduction of its gold illuminated folios. Our rigorous working method requires an average of ten consultations of the original.

• Pergamenata paper. 3D images. Stochastic screening. We applied to all its golds -leaf, ink- and silvers an ageing patina and subtle micro detachments, due to the passing of centuries and currently noticeable in all the medieval illuminated manuscripts. Other innovations of note can be found. These can be noted in the way the sharp contrasts give a three-dimensional effect to the imagery, as well as in the fine detail and the deep richness of its chromatic scale. The result surpasses a magnificent fine facsimile edition, it amazingly looks like an authentic original hand painted and illuminated manuscript.

• Edition limited to 500 single copies numbered and individually authenticated by notary public. 69 copies corresponding to the Gold Series on parchment format and fine gold leaf of 22.25 carat accompanied by a notarized laboratory analysis and 431 copies corresponding to the Pergamenata paper Series and gold leaf with similar characteristics to the one used by the most prestigious publishing houses specialized in facsimiles or quasi-originals of illuminated manuscripts on paper, pergamenata or natural lambskin parchment. Gold Series out of print.