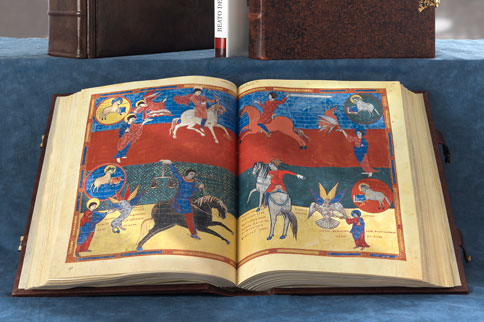 Illustrations:
112 miniatures illuminated in gold and more than 1,400 colour initials.

• The masterpiece of the European Romanesque.
• The only Beatus manuscript that inspired Picasso.
• The most lavish, ground-breaking and artistically significant of all the Beatus codices.
• Contains the only complete text of the Commentary on the Apocalypse by Beatus of Liébana, dating from 776.
• A work of extraordinary importance is the only way to characterize the Saint-Sever Beatus (Paris, Bibliothèque Nationale de France, Ms. lat. 8878), and all the superlatives it has accumulated scarcely do justice to its beauty. Certainly it is the most lavishly illustrated, original and artistically significant of all the known Beatus manuscripts, as well as providing the most complete text of the Commentary on the Apocalypse by Beatus of Liébana. The Saint-Sever Beatus was illustrated by Stephanus Garsia and other hands by order of Gregorio Muntaner, abbot of Saint-Sever, (1028-1072) an important monastery located in Gascony along the pilgrim road to Santiago de Compostela. It is the only Beatus manuscript originating outside the Iberian peninsula, but it follows the Spanish tradition in its illustrations. Its great point of artistic interest is the way in which the illuminators have made use of the iconographic conventions employed in the first edition of the Beatus and combined them with imagery from the third, the most lavishly illustrated edition of them all, while at the same time incorporating other motifs from what is probably a non-Hispanic illustrated Apocalypse. 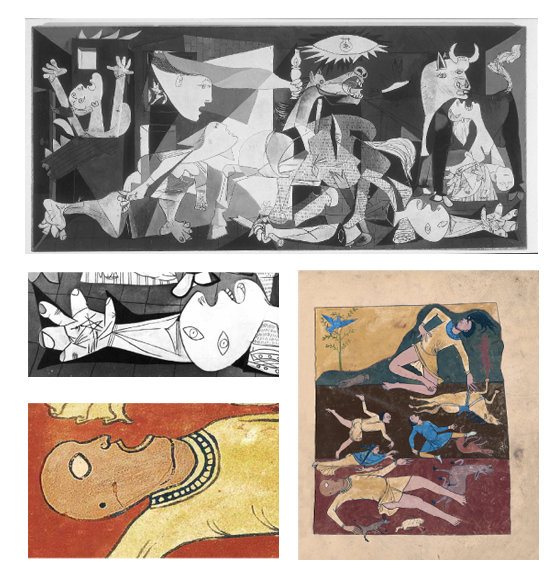 • Accordingly, this is the only Beatus that has drawn on three different models for its illustrations. Above all, one cannot help but be astonished by the artistic and intellectual sophistication of the miniatures, which are both extraordinarily faithful to their Biblical sources, while at the same time exhibiting a prodigious naturalism and quasi-modern expressionism. This is the only Beatus with a double-page “Maiestas Domini” equal in monumental scope to any of the great Romanesque carved portals in France. It is for that reason art historians have speculated that the manuscript was illuminated by a group of itinerant professional artists who had previous experience as mural painters. Taken as a whole, the images of the Saint-Sever Beatus are one of the masterpieces of medieval miniature painting. It is no wonder, then, that in Picasso’s famous painting, Guernica, the figure of the fallen soldier is inspired by the huge figure of a drowned corpse in the illustration of the Great Flood in the Saint-Sever Beatus. P. K. Klein.
• The Bibliothèque nationale de France gave us the exclusivity of the rights of exploitation for its faithful complete fine facsimile reproduction, and the exclusive authorization to contrast the proofs of the pre-printed folios with each page of the manuscript. Then, in our artisan workshops we have to make the colour adjustments and corrections on the latter proofs, until reaching the identical tones contained by the rich chromatic scale of the codex and the exact reproduction of its gold illuminated folios. Our rigorous working method requires an average of ten consultations of the original.

• Pergamenata paper. 3D images. Stochastic screening. We applied to all its golds an ageing patina and subtle micro detachments, due to the passing of centuries and currently noticeable in all medieval illuminated manuscripts. Other innovations of note can be found. These can be noted in the way the sharp contrasts give a three-dimensional effect to the imagery, as well as in the fine detail and the deep richness of its chromatic scale. The result surpasses a magnificent fine facsimile edition, it amazingly looks like an authentic original hand painted and illuminated manuscript.
• First and only complete fine facsimile edition in real size with gold leaf and pergamenata paper. Out of print.
• The only fine facsimile edition of all the editions of Beatus with real fine gold on its binding.