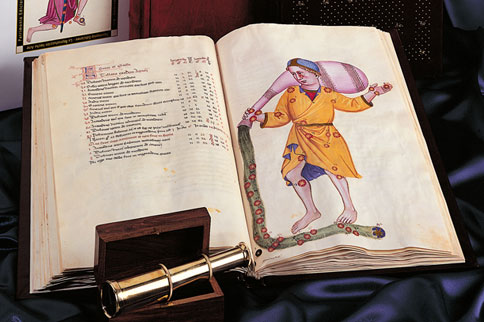 • Catalogue of stars, constellation by constellation, based on the astronomy of Ptolemy as edited by King Alfonso of Castile, commonly known as the Alfonsine Tables.

• Once considered a translation, according to its prologue, research has identified it as an original Alfonsine work.

• It is the first European manuscript to cite the Andromeda Nebula, unknown by Ptolemy.

• Alfonso X stands out in history as the patron of the first European program of investigation in applied astronomy. The analysis of his body of work makes sense only if one considers that the monarch was interested in this science due to its practical applications (astrology and talismanic magic) and did not attempt to cultivate it as a pure science.

• The ultimate expression of this effort to create an original astronomical work is represented by the Alfonsine Tables, which experienced a wide diffusion throughout Europe as of the 1320s and mark the birth of European astronomy.

• Bound in leather over wooden boards.