Splendor Solis. Treatise of Alchemy
The Origin of Modern Chemical Science and Medicine 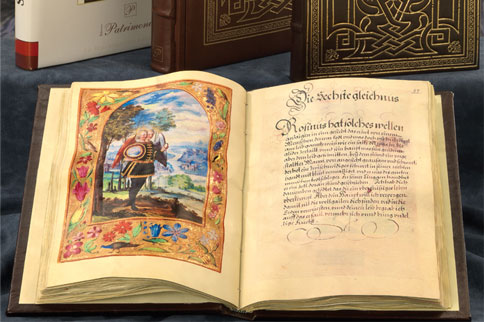 • The manuscript catalogued as All. 113 in the Bibliothèque Nationale de France is one of the oldest and most refined manuscripts of the Splendor Solis that exist. It served as a model for a number of later copies, among them British Library’s Harley 3469.

• Considered to be the origin of modern chemical science and medicine, its text is attributed to Salomon Trismosin, an alchemist who studied the secret of the philosopher’s stone -a legendary substance that supposedly could turn all metals into gold- and the secret of the elixir of life.

• Its illustrations make it the most refined alchemical manuscript, bringing to mind the work of his contemporaries Durer, Holbein and Cranach.

• It drew the attention of many people, among them, writers such as Umberto Eco, James Joyce and Butler Yeats.

• The Templars and the Philosophers’ Stone:

Their researches were preponderant and largely spread in Europe in the Middle Ages and Renaissance, they enabled the development of modern chemical science and medicine. The Templars owned a large quantity of gold and silver and were accused of obtaining it by means of alchemy. They acquired their knowledge while watching over the Ark of the Covenant, which contained all the secrets and knowledge of the universe and that was in Salomon’s Temple. The most important European monarchs took interest in this art, between science and magic. Philip II of Spain had Europe’s largest distillation laboratory built in the royal monastery of El Escorial.