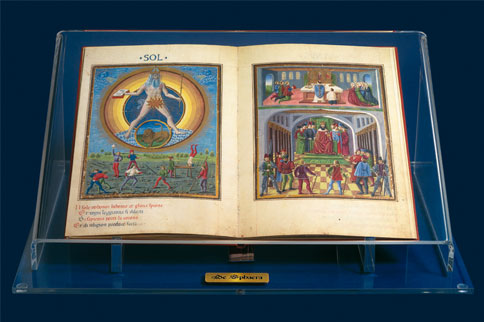 Illustrations:
25 miniatures: 15 full-page illuminations, 9 with astronomical drawings and one with a Table of Climates.

· Its 15 lavish full page miniatures are highly appreciated, not only because of its artistic level, but also of its value as a scientific document.

· Each page with the planet shown in an allegorical figure, together with its associated astrological sign, is followed by a miniature colorfully depicting everyday life in the XV Century.

· Illuminated for the Milan court by the refined artist of the Lombard school, Cristoforo de Predis, prominent collaborator and disciple of Leonardo da Vinci. The dukes of Milan – f. 4 shows the coat of arms of Francesco Sforza and Bianca Maria Visconti – commissioned the manuscript, that reached Ferrara forming part of the dowry of Anna Sforza, first wife of Alfonso d’Este, duke of Ferrara, via the artistic and cultural exchanges between both families.

· The codex sums up, with an unparalleled elegance, the astrologic knowledge of its time and testifies the reputation enjoyed by astrology and science in the European courts.

· De Sphaera is unanimously considered as the most beautifully decorated astrology book of the Renaissance. For this reason, it is in great demand for international exhibits in the main Libraries and Museums all around the world.

· This facsimile edition benefits from the major technological innovations in the area of the graphic arts, perfectly matching with the renaissancial craftwork. The use of lithography and serigraphy methods leads to the highest results, that go far beyond the old edition – dated 1995 – , both in color fidelity and in the printing definition. Our Frequency Modulated Screening or Stochastic Screening, invisible on close examination, on pergamenata paper, instead of conventional screening in honeycomb pattern on papier couche used in the former edition, together with a high level of resolution, displays the image as through a magnifying lens.

·  Twelve colors have been used, in front of five colors of the former edition, giving the best chromatic structure of the miniature as well as the visual and touch sensation of the original manuscript. The twelve color printing exactly reproduces the pigments of the miniatures of the Quattrocento, made from iron oxide, precious stones and other natural substances, including gold applied with a brush or burnished gold leafs, and the delicate silver, now oxidized; The whole provides a three-dimensional effect, contrast, volume and intensity to the imagery. The result surpasses a magnificent fine facsimile edition, it amazingly looks like an authentic original hand painted and illuminated manuscript. We applied to all its golds -leaf, ink- and silver an ageing patina and subtle micro detachments, due to the passing of centuries and currently noticeable in all medieval illuminated manuscripts.

· The sheet cutting of this facsimile reproduces exactly the profiles of the original: all the time-passing effects, such as bookworms’ holes in parchment, more numerous in the pages of the beginning and the end. These holes have been reproduced by using a laser cut technique involving accurate previous design. None of these details have been taken into account in the 1995’s edition.

· The whole of these characteristics definitely turns this facsimile into a collector’s item and an outstanding work of art.

·  The binding faithfully reproduces the original one, fire-engraved coat of arms of the Visconti-Sforza, in gold on red aged-leather.

·  Unique edition certified and limited to 100 copies for Spain and Portugal.