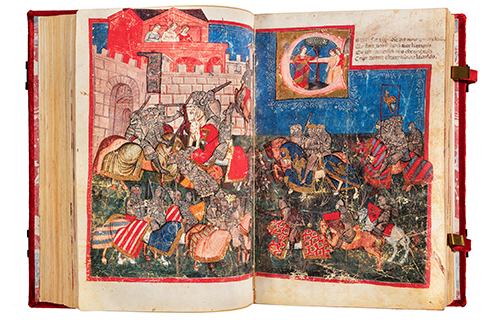 A masterpiece of French epic storytelling, The Song of Roland or Chanson de Roland recounts the legend of this knight, the nephew of Charlemagne, who on the 15th of August 778 died in an ambush in the Roncevaux Pass. Despite the events having occurred in the 8th century, they were transmitted orally until being transcribed in the 11th century by an unknown author.

Furthermore, the mark of the brave champion has been left on the stones along the Camino de Santiago which witnessed the battle, with names such as Poyo Roldán and La Piedra de Roldán, which have survived to the present day.

Beyond the codices, the feats of Roland are also found in other formats, such as on a spire of the town of Estella, representing the knight ready for battle against the giant named Ferracutus.

Although the Vita Karoli and the Codex Calixtinus are other sources referring to these events, in reality the most reliable information we have on the legend of Charlemagne’s champion are found in epic literature. In addition to the characters of the emperor, Roland and his twelve paladins, essential in this song are the actions of the characters of Marsile, the Saracen king, and the traitor Ganelon (who schemes against Roland due to envy), Gabriel (who intervenes in favour of the Franks) and the Vascons, who knew the territory and who carry out the Roncevaux ambush. The Song of Roland ends with Charlemagne’s victory over the Saracens and the trial of Ganelon.

The codex we are examining here is an illuminated copy from the 14th century, written in Franco-Italian Romance language, which belonged to the House of Gonzaga, the Duchy of Mantua, powerful princes who were lovers and notable patrons of art, both Mantegna and Pisanello were painters of their court. From the 18th century, the manuscript formed part of the collection of the Biblioteca Nazionale Marciana in Venice. The 407 images of Its battles, with a vivid realism which does not exclude scenes of stark severity, are certainly the best of the art of illumination of this time, also thanks to the richness and skill used in the colour treatment.

The two great Chansons de Gestes, The Song of Roland and The Song of my Cid, inspired Cervantes in his masterpiece, Don Quixote.

Codex on the flight of birds