Mi‘rajnama: The Book of the Prophet Muhammads’Ascension
Contains the Most Complete Cycle of Ascension Paintings in Islamic Art 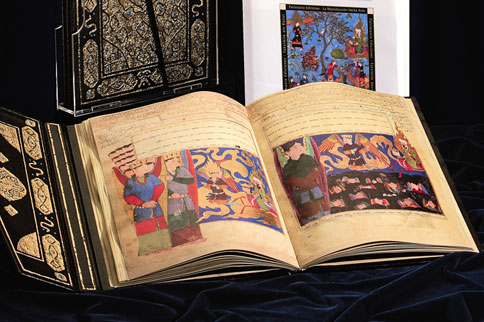 • The illustrated manuscript of the “Book of Ascension” produced for the Timurid ruler Shahrukh ca. 1436–37 contains the most complete cycle of ascension (mi‘raj) paintings in Islamic art. No other known Islamic manuscript provides a more powerful or complete pictorial cycle of the Prophet Muhammad’s ascension—or more graphic representations of the heavens, angels, and hell—than the Timurid Mi‘rajnama.

• The manuscript is a testament to the syncretistic style of Islamic painting produced in Iran and Central Asia during the Timurid period (ca. 1307–1507), which witnessed intense contacts between Islamic lands and the eastern world. Although the paintings depict a quintessentially Islamic biographical narrative, their iconography reveals undeniable Central Asian and Chinese Buddhist influences. In a similar manner, the use of Chaghatay Turkish for the Mi‘rajnama text underscores the growth of a Turkish vernacular at the Timurid court, and the use of Uighur script—originally employed for Buddhist texts— for the text’s transcription reveals the emerging importance of a non-Arabic script in Islamic lands during the fifteenth century.

• The lavishly illustrated monograph provides a companion study to the facsimile edition. It considers the history of mi‘raj texts and images, placing the manuscript within the broader cultural and political context of Ming-Timurid relations. The paintings’ main themes, visual language, pictorial sources, and influence on later Timurid and Ottoman paintings of the Prophet’s ascension also are addressed. Finally, the study’s appendices provide a full English translation of the Timurid Mi‘rajnama text, a comprehensive catalogue of its paintings, and a transcription of all Ottoman inscriptions.

• Bound in leather and fire-engraved in gold.