Hours of Joanna I of Castile and Philip the Fair
Masterpiece illustrated by Rogier van der Weyden, the Master of the David Scenes in the Grimani Breviary and Simon Marmion, the “prince of illuminators” 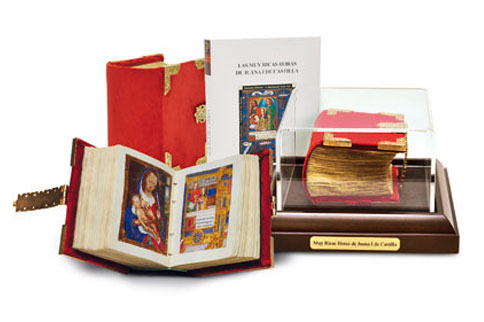 Extent:
850 pages made of refined parchment

· This luxury manuscript, lavishly illustrated by Rogier van der Weyden, the Master of the David Scenes in the Grimani Breviary and Simon Marmion, also known by his contemporaries as the “prince of illuminators”, bases its singularity not only in the fact of being one of the few royal commissions but also for being one of the most personalized in text and image among the early manuscripts of this period. Both Rogier van der Wayden and Simon Marmion have some of their works exhibited at the most important museums in the world, such as the Metropolitan Museum of Art of New York, the National Gallery of London, the Louvre of Paris or the Museo Nacional del Prado of Madrid.

Simon Marmion is an outstanding artist recognized for his sharp observation of nature and his intuition when capturing everyday life. His work delighted emperors, princes and dukes alike. In fact, the brilliant creative skills of Marmion both in his paintings and in his miniatures, unites in wonderful harmony the French traditions of the master Jean Fouquet, with the representations of the human form made by Netherlandish artist Rogier van der Weyden and Jan van Eyck’s naturalistic lyricism.

· The manuscript has been commissioned by the queen Joanna I of Castile for his wedding, the daughter of the queen Isabella of Castile and the king Ferdinand of Aragon, she was mother of two emperors, as well as four queens, wife of Philip the Handsome, the son of  the Holy Roman Emperor Maximilian of Austria and Mary of Burgundy.

· The manuscript contains several passages not usually found in books of hours, including a complete series of texts of the catechism considered as appropriated for a young bride; the likewise rare Hours of the Guardian Angel, featuring the portrait of Joanna, three elaborated series of texts and illuminations of Christ’s Passion, and a rare prayer to the Virgin Mary, accompanied by a second portrait of the archduchess.

·  The history of this complete facsimile edition goes back to 2002, when David Way and Justin Clegg, then Head of Publications and Curator of the British library, respectively, showed Ana Docavo, as Head of Publications, and myself, as Editor of Patrimonio Ediciones, their most notable treasures. These were fully restricted access manuscripts, including, among others: the Isabella Breviary (Add. Ms. 18851), the Book of Hours of Joanna I of Castile (Add. Ms. 18852), the Vaticinia Pontificum by Benozzo Gozzoli (Harley Ms. 1340), the Genealogy of the Royal Houses of Europe (Add. Ms. 12531, illustrated by Simon Bening), the Travels of Sir John Mandeville (Add. Ms. 24189) and the Divina Commedia belonging to Alfonso V of Aragon, Naples and Sicily (Yates Thompson Ms. 36). We were both fascinated by the uniqueness, sumptuousness and charm of the only devotional manuscript remaining from the collections of Joanna I of Castile, which I would describe as love at first sight.

·  All of its 854 pages are profusely illustrated and illuminated with gold, both with numerous full page miniatures and the rest of its folios on which illustrations are present on the upper, lateral and lower sections. There are isolated motifs in which drolleries or fantasy beings, birds, flowers, insects, and a varied bestiary appear, and decorated with numerous precious stones such as sumptuous jewels, amulets and insignia of pilgrimage belonging to the Queen’s collections.

From that moment, we decided to undertake its facsimile publication together with the British Library, overcoming countless technical, preservation and patronage obstacles, until, in 2009, we signed an agreement which granted us exclusive and global usage rights, allowing the highest resolution photographs to be taken of all of its pages, as well as access – bringing us to the Library on over 12 occasions – to contrast each one of its pages with the pre-printing tests, making adjustments to tone, and colour and gold intensity with the original until its faithful and identical reproduction.

·  I am sincerely grateful to Dr Scot McKendrick and Professor Eberhard König for their comments on the work. Their scholarship is accompanied by a clarity which will allow readers the enjoyment and richness of understanding of an extraordinary work. We are also grateful to British Library for the honour of allowing us to make this first edition which fully reproduces the manuscript in colour, with the actual size and binding of the only book of hours that definitely belonged to Joanna I of Castile, in the sense of having overwhelming accrediting tests.

As in the original, in our facsimile we have also spent years of work and have required a legion of craftspeople, goldsmiths and artists, who make each replica into a unique copy.

The present facsimile binding reproduces the original one, made of red silk-velvet on a board with four corner-pieces and a broad clasp in bronze, plated with gold 24kt.

· The only Book of Hours of Joanna of Castile

The manuscript presented here is the only book of hours undoubtedly owned by the unfortunate Joanna of Castile, today mostly known as Joanna the Mad, Juana la Loca; and this is affirmed by the fact that her portrait appears twice. On fol. 26, we see the arms customary after Joanna’s marriage in 1496: Joanna’s coat of arms as Queen of Castile topped with the golden crown, and under the archduke’s headgear the arms of Philip the Handsome from the house of Habsburg, composed of the banded shield of Austria and the colours of Burgundy with an escutcheon of the arms of Flanders, showing a lion rampant. The initials P and I for Philip and Joanna are linked by a love knot. Two mottoes pose a question and give an answer, reading twice QUI VOULDRA, i. e. who will want? – and once IE LE VEUS, i. e. I want it! Concerning the picture of Joanna in prayer, we know about her facial traits from various paintings of Flemish artists around 1500 as well as from the the glorifying representation at the cenotaph of her father-in-law, the emperor Maximilian, in the court church in Innsbruck. In the book of hours she can be identified, since she is represented not only by her guardian angel, but also by John the Baptist; who was chosen to be her patron saint at her baptism. Third, the volume’s clear identity with the subject of one of the entries in the inventory of Joanna’s goods compiled in 1545. There it is described as:

· Why, within a collection of over one hundred and fifty million items, does the Hours of Joanna of Castile (Add. Ms. 18852) remain one of the greatest treasures of the British Library?

Almost immediately after its acquisition by the British Museum Library in 1853 it was singled out for note by the German art historian Gustav Friedrich Waagen (1794-1868). In his account of the art treasures of Great Britain he memorably described it as ‘one of the most delicate and elegant examples of the Van Eyck school’. Thereafter it was regularly displayed in the public galleries of the British Museum and noted in the principal surveys of manuscripts illuminated in the southern Netherlands. More specialised studies have focused on aspects of the volume’s imaginative illustrative campaign, including the arresting opening Mirror of Conscience (fol. 15) and copies of a Byzantine icon of the Virgin Hodegetria (fol. 176v) and of Rogier van der Weyden’s Virgin and Child (fol. 287v).

In addition, the Hours of Joanna of Castile (Add. 18852) is recognised as an important part of the cultural heritage of Spain. It is after all the only devotional manuscript to survive from the collections of one of the country’s most celebrated princesses. This codex is actually the only undoubtedly owned by Joanna of Castile. and this is affirmed not only by the fact that it outstandingly shows the coat of arms of Joanna and his husband Philp the Fair (fol. 26) but also for the volume’s clear identity with the subject of one of the entries in the inventory of Joanna’s goods compiled in 1545.

· Other Mansucripts for Joanna of Castile?

As early as in 1983, Thomas Kren suggested linking to the queen another book of hours, which is larger in format but more trivial in content, Add. MS. 35313 in London, British Library. At the time he was undetermined if it should rather be attributed to John, Prince of Asturias; though the miniature at the Office of the Dead is clear evidence that it was made for a woman. This miniature is nothing but an enlarged copy from the Berlin Book of Hours of Mary of Burgundy. Since her daughter Margaret of Austria had inherited the codex from her mother Mary, in the exhibition catalogue of 2003, Kren assumed the archduchess had commissioned the new manuscript for her niece, Joanna of Castile. Based on such vague assumptions, the facsimile edition published two years later simply ventured to label the volume ‘The Book of Hours of Joanna of Castile’, though without analysing its provenance. In any case, for a picture of the queen, a miniature from the present book of hours, Add. Ms. 18852, fol. 288, had to be borrowed (See C. Miranda García-Tejedor 2005, p.25).

· Edition limited to 500 single copies numbered and individually authenticated by notary public, each one corresponding to the Gold Series, with fine gold leaf of 22.25 carat accompanied by a notarized laboratory analysis.

· Patrimonio Ediciones is the only company worldwide using fine gold and genuine precious stones and, consequently, the only one providing a notarial certificate after gemological laboratory tests.