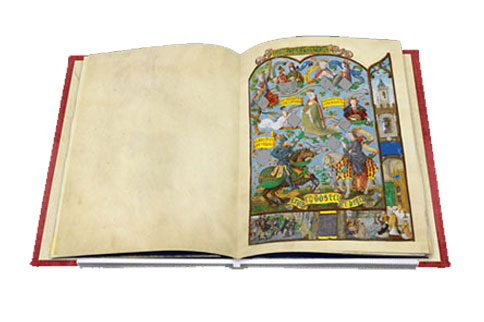 Illustrations:
42; 13 miniatures full-paged and 29 marginal scenes richly illuminated with gold and silver leaves by Simon Bening and Antonio de Holanda. Red velvet over table with silk fastener; cover and backcover with four bronze cabochons bathed in pure gold of 24carats. The three edges of its leaves, in golden.

it is remarkable not only for the brightness of the colors, the great number

of portraits and other objects, but for the perfection of the drawing,

the immense variety of clothes and the attitude of the figures, and also

for the expression of the physiognomies, existing an extensive harmony

in the disposition of these figures and in the colors”

Like the majestic naves of an unfinished cathedral, the Genealogy of the Royal Houses of Europe rises as the most extraordinary witness of the end of a pictorial modality, the illumination of manuscripts, which had crossed more than one thousand years of artistic tradition in the West and which was disposed to die as a consequence, amongst other factors, of the extension of printing all over Europe. It is exceptional in many senses since it constitutes the only illuminated genealogy of all the Flemish miniature. The measure of its leaves is about 59,3 x 43,1 cm, making it the illuminated manuscript of highest format in the art history. Furthermore, it is the best work of two geniuses of painting, Simon Bening and Antonio de Holanda.

This extraordinary large and politically weighted royal genealogy attests to the tremendous prestige enjoyed by Flemish illumination at the European courts in the first half of the XVI century. Under the reign of Manuel I the Great of Portugal (1495-1521) and his wife Maria, daughter of the Catholic Monarchs, Ferdinand and Isabela of Castile, the alliance between Portugal and Spain had been sealed for quite some time. This important ruler commissioned altarpieces from the famous Quentin Massys of Amberes and he also commissioned the no less famous Flemish illuminator Simon Bening. The illustration of this valuable parchment manuscript is striking proof that Bening enjoyed the favor of the Portuguese household. Among his clients stand out the emperor Maximilian, Joana I of Castile, her son the emperor Charles V, Philip II, Margaret of Austria, among others. We

are dealing with a genealogy financed by the Infant Ferdinand of Portugal, grandson of the Catholic Monarchs and brother of King John II, which was decorated approximately between 1530 and 1534. The Genealogical Tree starts in an unusual way at that time, that is to say, with the ancestors of Ferdinand in the Old Testament and finishes with Ferdinand himself.

It is documented that the outlines for this codex were made in Lisbon by Antonio de Holanda. After that, the pages were sent to Bruges for their final treatment, where Simon Bening made the illumination. After the death of the Infant in 1534, the works in this codex were given as finished. Bening, at that time, had illuminated five pages.

Antonio de Holanda, later concluded eight more pages. The works of Bening for this manuscript are of an excellent artistic quality. He seems to have drawn his conception of the genealogical tree from the traditional religious motifs that appear in the trunk of Jesse. In the ramifications are found integrated figures magnificent drew and colored, in addition to phylacteries, the forms are treated with an impressive plasticity and physiognomy variety, and the attitudes and the dresses are impregnated of an untiring creative creativity. As a border, the tables are decorated with small scenes in which they appear in a large number of characters piled up or of historical battles fought in deep or distant landscapes and with spatial depth and compositional harmony; it is not exactly typical format of small images. The exceptional size of the leaves, 58 cm high, makes the genealogy the illuminated manuscript of largest format of the entire history of Western art, giving to the representations the character of the monumental paintings of table inspired by the modern principles of the Renaissance.

THE CREATION OF THE MANUSCRIPT IS UNUSUALLY WELL DOCUMENTED

Damião de Góis (1501-1573), a diplomat and humanist and the secretary to Indiahouse, the Portuguese trade mission in Antwerp from 1523, also an art collector, related the complex circumstances behind the conception and execution of the genealogy. He stated that during his Antwerp sojourn in the service of King John II, the king’s brother Dom Fernando: Ordered me to find whatever chronicles I could, either manuscript or printed, in whatever language, so I ordered them all. And to compose a chronicle of the kings of Hispanha since

the time of Noah and thereafter, I paid a great deal to learned men: salaries, pensions, and other favors. I ordered a drawing of tree and trunk of this line since the time of Noah to King Manuel I, his father. Dom Fernando ordered it illuminated for himself by the principal master of this art in all of Europe, by name of Simon of Bruges in Flanders. For this tree and other things I spent a great deal of money.

The drawings were supplied by Antonio de Holanda, as indicated by the notations of his son Francisco, the artist and humanist, in the latter’s copy of Vasari. The project was under way in 1530 because góis wrote to Don Fernando on August 15 of that year with a progress report, informing him that the aforementioned Simon of Bruges, who was certainly Simon Bening, was disappointed because only a single drawing had arrived. Bening expected the

project to take up to two years, and he had finished all other projects so that he could concentrate on this one. He had hoped to receive as many as four drawings by then. In 1539, five years after the project was interrupted by the death of Don Fernando, Antonio still had not been paid for his work. Ultimately Bening had illuminated only five leaves of the surviving thirteen. Holanda colored another seven of his drawings, while the illumination of one of the drawings was never begun.

Simon Bening illuminated the border of the first surviving leaf to feature the actual ancestral tree, fol. 2. It shows the tree of Magog with the legendary ancestors of the kings of Hungary. Góis tells us that the book begins with the time of Noah; Magog was Noah’s grandson. Bening also illuminated the tree leaves representing the entwined lines of Navarre and Aragon, and the first two tables illustrating the line of John of Gaunt, duke of Lancaster. The latter’s descendants included rulers of Burgundy, Germany, Portugal and

Castile. Among those depicted at the far right are Charles The Bold and Maximilian I. Antonio de Holanda illuminated the prologue, the trees for the rulers of Leon and Castile, and those of the monarchs of Portugal, linked to the houses of Savoy (they appear both portraits of Matilda of Savoy and Alfonso I of Portugal), Sicily or the dukes of Venice.

The second of the tables linked to John of Gaunt, showing the tree of the kings of England and Castile, is one that was drawn but never illuminated. This exquisite drawing, partially damaged by water, demonstrates Holanda’s considerable gifts as a draftsman, which surpassed his abilities as an illuminator. The refined technique gives the materials a velvety quality and provided Bening with a crisp, fully elaborated design to paint. This drawing suggests that Bening followed Holanda’s other designs closely, as indicated by the similar

poses and figural arrangements of the five leaves he completed, but Bening left his mark on them nevertheless, in the liveliness of expression and in the treatment of light and shadow, the flesh tones, the facial types, and the costly brocades.