Set of Atlases: the Charles V and Magellan Atlases
The Set Consists of Two Codices by Batista Agnese of Genoa 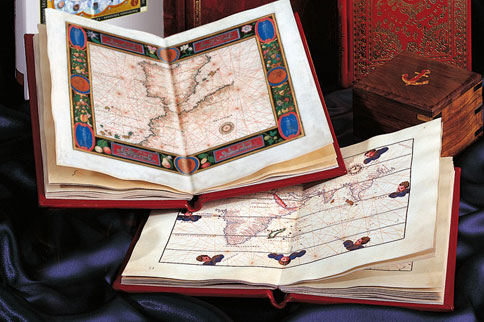 • This set consists of two codices by Batista Agnese of Genoa, the prestigious and prolific 16th-century cartographer who produced most of his works commissioned by the royal houses of Europe.

• His work is characterized by the sumptuousness of the colours used in the harbour charts and the planisphere indicating the route that Magellan and his second-in- command Elcano followed on the voyage in which the globe was circumnavigated for the first time in history, an enterprise financed by the Emperor Charles V, and the double-page illustrations of the armillary sphere and the Zodiac, and the lavish use of gold leaf in the illustrations on its small folio pages.

• 32 parchment pages illuminated in gold and extravagantly decorated with Renaissance motifs by Giulio Clovio, known to his contemporaries as the Michelangelo of illuminated manuscripts. Among his best known works are the Triumphs of Charles V and the Farnese Book of Hours.

• Commissioned by the Emperor Charles V, this book was used in the geography lessons given to the crown prince, the future King Philip II of Spain, and presented as a permanent gift to the heir to the throne on the occasion of his 16th birthday.

• Manuscript in the National Library of Spain, Ms. Res. 176.

• 36 parchment pages illuminated in gold and highlighted by cartographic illustrations.

The first round the world voyage. The Voyage of Magellan, financed by Charles V:

III. They weigh anchor again and set off in search of a southern passage.

IV. They transverse the body of water now known as the Strait of Magellan.

V. Magellan dies in the Philippines. Elcano takes command and sets out on the homeward voyage, his ships laden with precious spices.

VI. Elcano goes round the Cape of Good Hope. VII. Returns to Seville on 6 September 1522.