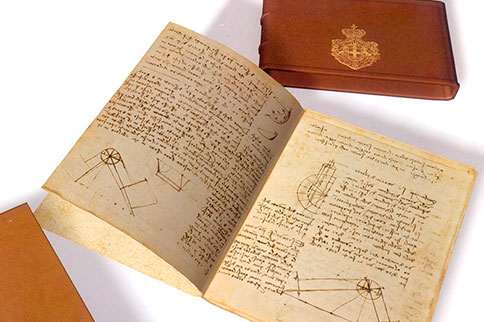 Illustrations: all of its pages that include a lot of sketches with dip pen in the wide margins.
Case: identical to the original in brown leather with shield in the exterior side embossed in gold.
It’s accompanied by a volume of study in charge of Doctor Elisa Ruiz. It includes the Italian transcription and the Spanish translation.

This treasure that holds the thoughts of one of the most important genius in history, Leonardo Da Vinci, is an example of the multitude of disciplines which he had knowledge about: anatomy, physics, optics, mechanics, hydraulic and architecture among others. Leonardo Da Vinci’s ideas about flight, which were conceived more than 500 years ago, are determinant for the nowadays aeronautics.

While he was painting the Gioconda, he built the idea about a treatise on the flight and wrote a reminder to divide his observations of the birds in 4 books. First one concerns the way of flying beating the wings; second, the flight without beating the wings in favor of the wind; third, to what it has in common between the flight of birds, bats, flying fish and the insects; fourth and last, to the movement of flight based on a mechanism.

The obsession of Leonardo to understand the flight and copy it with a machine that would allow the man to fly it was evident in this codex on the flight of birds written in 1505. It has 38 pages of 154x213mm, all of them filled with text with the characteristic specular writing of Leonardo and includes a lot of sketches with dip pen in the wide margins. His attention is focused on three separate topics, although intimately related: how the birds fly, the general principles of aerodynamics and which type of machine would make possible the flight of humans. Coming from the Royal Library and Museum of Turin, the Codex is dated in 1505, almost 400 years before the flight of the Wright brothers (1903).

Two of his discoveries, the movement of the air over a bird’s wing, similar to the fluids, and how the center of gravity and the pressure center of a bird are different, were extraordinary intuitions that anticipated some of the fundaments of the modern aeronautic. This document was of such influence for the study of aviation that a digital copy was sent to Mars in the Curiosity rover that landed in the red planet in august 2012.

Leonardo continued his observations pointing out the differences between the flexible components of the bird’s wings, the feathers and the rigid components, the bones. Leonardo also noticed the importance of the atmospheric conditions and other aerodynamic factors, for these reason he decided to focus on machines that help the man to glide in air currents and thus created one that resembled a big bird of prey. Even some of his thoughts took the form of a flight manual “if the wing and the tail are over the wind, low down half of the opposite wing and will receive the wind strength and will straighten”. Among his manuscripts appear the studies and sketches of hang glider and helicopter.

The pages of the codex on the flight of birds also contain multiple unexpected insertions, like the anatomic study of a leg or the sketch of the face of a man under the text lines. The identity of the face remained as a secret for more than 500 years. In 2009 digital analysts were capable of separate the draw from the text and made it possible show the image of Leonardo’s self-portrait with the age of 50. For Leonardo, art was the fundament of engineering and the engineering was an expression of art. The artist that painted Mona Lisa and Last Supper was a visionary of the Renaissance that saw the modern world before this was made.

In this way it would also explain the opinion that Francis I, king of France, expressed in 1542 about the scientific knowledge of Leonardo, gathered by Cellini: “I would not like to stop repeating the words that I listened from the king about him, words that were directed to me in presence of the Ferrara’s cardinal and Lorena’s cardinal and the king of Navarre; he said that he did not believed that existed other man in the world that had so many knowledge as Leonardo, not as much as an sculptor, but as an extraordinary philosopher”.

The price of Leonardo’s manuscripts beats all records, Bill Gates paid $ 30,802,500 dollars in Sotheby’s New York or the Codex Leicester or Hammer of Leonardo in 1994, which has of 36 pages.
Patrimonio Ediciones is the only company in the world that uses fine gold and authentic gemstones, reason why, we equally are the unique one that credits it by notary through analysis in laboratory.

The golden ratio contributed significantly by connecting the studies of Leonardo da Vinci with his studies of geometry, light and optics with his art, mastering the shading and perspective to model objects on a two-dimensional surface so that these appear to be three-dimensional

On the occasion of the V LEONARDO CENTENARY, the most important museums in the world chose Patrimonio Ediciones to honor this universal genius, coediting and accurately reproducing his codexes and master pieces. First and only full facsimile edition limited, with its copies numbered and authenticated by notary, which includes the four most famous works by Leonardo, never before reproduced in full facsimile format.