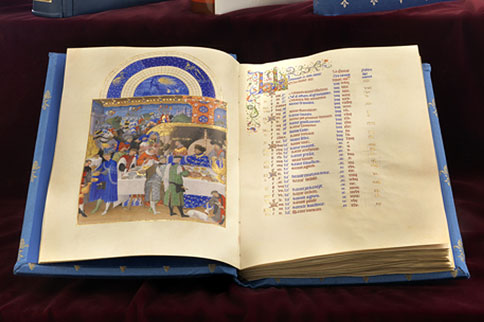 Illustrations:
130 miniatures and 102 pages of text. Goes together with a Cd-Rom containing the 208 folios which make up the original codex.

• First, true and unique fine facsimile edition with pergamenata paper specially treated. This exclusive handcrafted paper which price is 10 times superior to couche paper, used by Patrimonio in their commentary volumes, enables you, after our necessary and exclusive secret process of medieval ageing, to enjoy the following senses. Sense of touch: absolutely similar; sense of hearing: characteristic sound while passing its folios; sense of sight: undulation and roughness similar to the folios of the original codex; sense of smell: characteristic smell.

• 3D images. We applied to all its golds -leaf, ink- and silvers an ageing patina and subtle micro detachments, due to the passing of centuries and currently noticeable in all medieval illuminated manuscripts. Stochastic screening.

• Pergamenata Edition. First and unique fine facsimile edition with pergamenata paper and gold leaf with similar characteristics to the one used by the most prestigious publishing houses specialized in quasi-originals or facsimiles of illuminated manuscripts on paper, pergamenata or natural lambskin parchment. 744 single copies numbered and individually authenticated by notary public, exclusively intended for the new subscribers of the Collection Bibliothèque duc de Berry composed of the Bible moralisée of the Limbourgs, the Grandes Heures of the Duke of Berry and the Très Riches Heures of the Duke of Berry.

• Italia Edition. 150 single copies numbered and individually authenticated by notary public. The use of paper and golden leaf with similar characteristics to the ones used by other publishers reduces significantly its costs, the result is a best price facsimile.

• Quite unlike the fragile Ms. Fr. 166, the Très Riches Heures of the Duke of Berry has been reproduced on several occasions, ever since the far-seeing New York publisher George Braziller joined forces with Draeger frères of Paris, out of whose workshops there emerged a magnificent facsimile of the priceless original.

• That is why we sought to add something extra to our proposal for bringing a new facsimile edition of this treasured work before the public. For the first time ever, the illustrations for the Très Riches Heures have been illuminated the way its creators meant it to be, by the liberal application of fine gold leaf on each and every one of its pages.

• Our Gold Series, which has sold out before its publication date, is accompanied by a notarized laboratory analysis confirming that 22.25 carat gold has been used throughout to faithfully recreate the splendor of the original.

• Other innovations of note can be found in all three of the series, Gold, Pergamenata and Italy. These can be noted in the way the sharp contrasts give a three-dimensional effect to the imagery, as well as in the fine detail and the deep richness of its tones of lapis lazuli blue. The result surpasses a magnificent fine facsimile edition, it amazingly looks like an authentic original hand painted and illuminated manuscript.

• The Très Riches Heures has been described as the summit of illuminated manuscripts, and a landmark in the history of art. It was the last work commissioned by the Duke of Berry, the most celebrated patron of the arts during the Gothic period.

• In 1416, the sudden death of the Limbourg brothers, followed by the death of their patron, the duke, left the manuscript in an unfinished state, most likely in the form of loose unbound sheets. In creating a binding of genuine silk for our facsimile edition, we have carefully studied the inventory of items belonging to Jean, Duke of Berry, made in 1413, which provides a detailed description of the bindings on the hundreds of codices in his collection.

• The images of the original codex for its fine facsimile publication can be obtained through various entities, such as the Réunion des Musées Nationaux de France or others.