The Bible of San Paolo
The Most Sumptuous and Illuminated Carolingian Bible The Bible which Officiated the Coronation of the Popes. 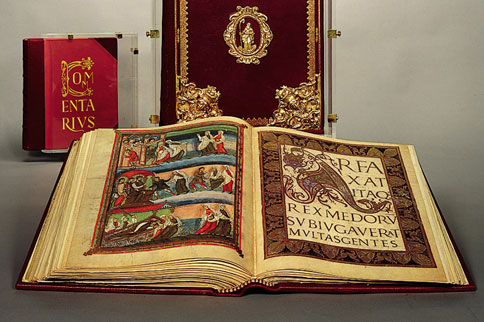 • In the year 1646, this magnificent Bible manuscript dating from the late Carolingian era was restored at the abbey of San Paolo in Rome and rebound (as it had already been). The picture of an enthroned sovereign which is now seen at the beginning of the book (folio 1r) was originally at the end. The picture and the accompanying verses relate to a certain King Charles. Whether this king was Charles III or Charles the Bald was once a controversial issue fiercely debated, but the scholars have long been in agreement that the monarch is in fact the latter. The poem of dedication expresses a wish for a legitimate heir, and this has been linked to Richildis, second queen of Charles the Bald, who would then by inference be the figure seated beside the sovereign. Unfortunately the monogram in the globe the king is holding cannot be satisfactorily deciphered. Even so, given the probable origins of the work as now reconstructed by the scholars, the Bible can be dated to after the date of the marriage in 870, and before Charles the Bald’s coronation as emperor in 875. This dating appears satisfactory on internal grounds of style as well.

• The immense Bible, containing the Old Testaments in their entirety, is a more sumptuous book than any other surviving Carolingian Bible.

• It has 35 magnificently decorated incipit pages introducing the individual sections of the manuscript. The beginnings of the chapters in the book of Genesis, like the names of the ancestors of Christ, are written in gold and silver on purple, in two columns framed by acanthus; four canon tables feature arcades richly decorated with figures and ornamentation; throughout the text there are numerous handsome initials; and above all, the 24 full-page miniatures (originally there was one for the book of Job, traces of which remain visible) constitute the most extensive cycle in any surviving Carolingian illuminated Bible.

• In addition to the dedication picture already referred to, there are an image of St. Jerome, 14 illustrations to books of the Old Testament, a picture of Christ in majesty, the four evangelists, and a picture apiece for the Acts of the Apostles, the Epistles of St. Paul, and Revelation. Doubtless a number of scribes were required to write the text. The principal master is generally taken to be the Ingobert referred to in the poem of dedication (a scribe and not, as sometimes claimed, the miniaturist of this Bible), whose hand can also be proven in other books of that era and region.

• In their style, the miniatures exhibit a tendency to hark back to the approaches taken under Charlemagne in Aachen, a tendency characteristic of book production under Charles the Bald. Apart from this fundamental tenor, there are also reminiscences, extending into details, of the large and sumptuous Bibles made not very much earlier in Tours, such as the celebrated Vivian Bible, which had also been commissioned by Charles the Bald, around the year 845; and reminiscences too of the Bible completed around 840 in Moutier-Grandval, now in the British Library in London. Furthermore, the influence of the Reims school may be detected throughout in the treatment of figures and in the nature of the decoration, and, behind the aesthetics of Reims, the legacy of late antiquity. While the quality of the script and penmanship are subject to vagaries, the manner can ultimately be traced to the important scriptorium of Archbishop Hincmar of Reims (845-882). All these influences, it must be said, blend in this manuscript in a distinctly uninventive, eclectic fashion, lending it (for all its outward sumptuousness) a rather imitative appearance. This was not untypical for this late point in the Carolingian era, or for the production of manuscripts books at the court school of Charles the Bald.

• Provenance: The manuscript appears to have passed to Pope John VIII in Rome as a gift from Charles the Bald on the occasion of his coronation as Emperor in the year 875. Documents show the book to have been in Rome in the 11th century. Under Pope Gregory VII (Pope from 1073 to 1085) it passed to the abbey of San Paolo fuori le Mura.

• The edition is limited to 1000 copies, including a special edition of 75 produced in pergamena paper, ordered by Patrimonio Ediciones.

• The Gruppo Istituto Poligrafico e Zecca dello Stato- national coin manufacturer of the Italian Republic- kept temporally the original manuscript in their pre-printing and printing workshops, from the beginning until the end of its edition. This data appears on the notary public and is guarantor of the exceptional quality and fidelity of the fine facsimile edition in comparison with the original codex.