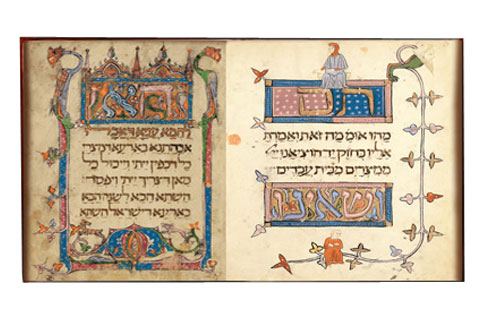 Illustrations:
40 miniatures illuminated in gold and silver and 60 partially illuminated or only drawn.

• The Haggadah commemorates the Exodus of the Israelites from Egypt and their divine mission. This book is used in the ceremony on the first evening of the Jewish feast of Passover, which coincides with Easter. Its text includes stories from the Old Testament, legend, fables, aphorism, psalms, sermons and exegeses (interpretations), and derive essentially from oral traditions current at the time of the Second Temple, before 70 B. C. Only later were they expanded and recorded in writing. By the 14th century they have become a canonical institution.

• The written passages read out at the family meal that marks the beginning of Passover were collected in portable private devotional books. In the 13th and 14th centuries noble Jewish patrons at the European royal courts were keen to have the Haggadah illuminated in the book painting style of the time. In these circles the traditional, purely ornamental decoration was combined with fashionable figurative representations executed to the highest artistic standards.

• The codex is especially fascinating because it demonstrates the making of a manuscript in the Middle Ages, enabling us to view its illumination after the text was written: the preparatory drawings, the laying down of gesso in order to cushion the gold leaf, the application of gold and silver leaf, and ultimately the application of pigments. The skill of the artist is of a very high order, both in the preparatory drawings and in the completed pages, whose brilliant colours look as fresh today as when they were applied.

• Unique edition of 100 numbered copies with notarized certificate of authenticity.