It belonged to Margaret of Austria and Napoleon
History of Alexander the Great
Commissioned by Philip the Fair, King of France 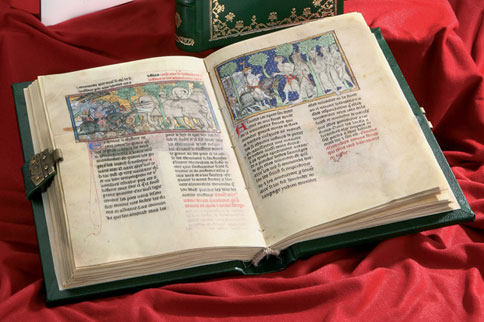 Illustrations:
100 illuminated miniatures on a gold and silver background.

• Considered a masterpiece of the Flemish miniature.

• The codex that is the object of this rigorous fine facsimile edition is the oldest and most luxurious of the many copies that survive.

• Alexander the Great, the most esteemed flesh-and-blood hero of Greek history, conquered the world at the height of his youth. His exceptional military talent, ambition, audacity, bravery, and charisma were used as models by Caesar and by subsequent emperors, kings, and princes up to the present day. Proof of this are the numerous manuscripts commissioned for royal libraries that relate his biography. This work held pride of place in the library of Isabel the Catholic.

• The story of Alexander the Great, in Old French prose, takes as its model the narrative text of Preliis -a battle history- written in the 10th century by Archbishop Leo of Naples. In addition to narrating historic events, its content has evolved into a novel of adventure with descriptions of exotic voyages and legends that reflect the spirit of medieval feudal society, being the most read after the Bible. In Orient Alexander the Great, called Iskander, was considered to be the winner of the Persians and a great benefactor king. The 12th century Persian sources even recognize him as a prophet and represented his heroic deeds in beautiful illustrations.

• Codex bound in leather over wooden boards with bronze hinges and clasps.