Grimani Breviary
The most important masterpiece of the Renaissance Flemish miniature 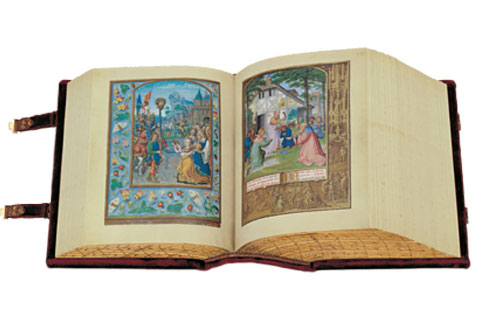 • The codex known as «Breviario Grimani» is without a doubt one of the most important, if not the most important, works of Flemish art from the Renaissance period. It was produced between 1510 and 1520 by Gerard David, Gerard Horenbout, Simon Bening and other artists, followers of Hugo Van der Goes, Memling, Metsys, Jan Gossaert, etc. Although it is not certain who commissioned it, it does have some similarities with the equally famous and somewhat older codex Très Riches Heures of the Duke of Berry, owned by Margaret of Austria, daughter of Maximillian I and the Governor of the Netherlands. It was purchased in about 1520, for the price of 500 gold ducats, by Cardinal Domenico Grimani, who left it in his will to the Serenissima Repubblica di Venezia. His will stated that it was to be left on the condition that the code were only shown to people held in high consideration and in exceptional circumstances. Up until 1781 it was one of the assets kept by the de supra agents, then it became part of “Saint Mark’s Treasures» and is currently kept at the Biblioteca Marciana.

• It consists of 835 papers, and is elaborately bound in crimson velvet and plate decorated with elegant finely chiselled frames that surround scrolls and medals portraying Doge Antonio Grimani and Cardinal Domenico, in golden bronze. The «Breviario » is a monumental and unique testimony of the splendour of Renaissance Flemish art.

• The extraordinary feature of this codex is not only the number and quality of the full-page miniatures, but the choice of themes, which are extremely varied and suggestive alternating between religious and unholy subjects and the attention given to the other pages. The majority of them were decorated with miniated borders, or with different sized and composed picture decorations, illustrating floral or plant motifs as well as animals, lapidary especially birds, insects, precious pearls and stones, architectural carvings or even small scenes that were the same size as the text columns. It was very finely created and gives an extremely refined tone to the entire artefact. The writing itself is clear and elegant and enhanced by decorative elements and leading letters are frequently ornate and of varying size. Full sized miniatures frequently correspond with the months and depict colourful scenes from country life and winter landscapes, daily activities such as countryfolk working in the field or hunting or banquet scenes and other pastimes of the members of rich Flemish bourgeoisies as well as holy subjects (a long sequence is dedicated to cycles of bible history), zodiac signs etc. The whole work is embellished by the extended, yet sober and delicate, use of gold.