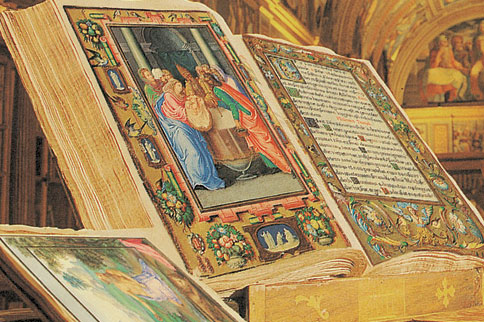 • The richest and most characteristic work created in the scriptorium of the Real Monasterio de El Escorial, where it is conserved.

• It was written and illuminated by the monks Andrés de León, Julián de la Fuente el Saz, and Martín de Palencia, who were inspired by the Mannerist style of Giulio Clovio.

• Giulio Clovio was born in Croatia and died in Italia (1498-1578) and was known to his contemporaries as the Michelangelo of illuminated manuscripts. Among his best known works are the Triumphs of Charles V, the Atlas of Charles V and the Farnese Book of Hours.

• In the creation of the fine facsimile the gold has been applied by hand, thus achieving a reproduction faithful to the original.

• Bound in leather over wooden boards.

• Unique edition of 979 numbered copies with notarized certificate of authenticity.