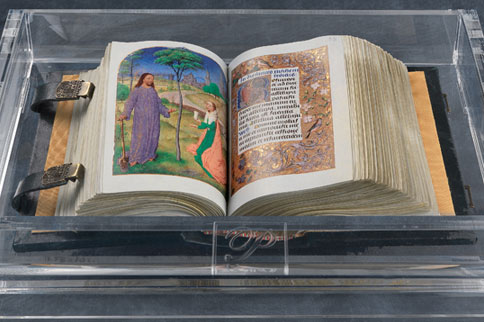 Extent:
650 parchment pages, illuminated in gold and silver by the most celebrated Flemish painters of the period.

Illustrations:
87 large-format miniatures and 583 quarter-page ones with motifs depicting vegetation, animals and insects.

• The fine facsimile edition reconstructs the codex as it originally was, by bringing together the totality of its folios, currently found in the collections of the National Library of Spain (Madrid), the Staatliche Museen zu Berlin (Germany) and the Philadelphia Museum of Art (USA).

• Ghent. 1475. 650 parchment pages, every single page is illustrated and illuminated in gold and silver by Flemish painters of high renown: Hugo Van der Goes- the Master of the Book of Hours of Mary of Burgundy -, the Master of the Dresden Prayer Book, Lieven van Lathem, Nicolas Spierinc and Simon Marmion – also known by his contemporaries as the “prince of illuminators”, who collaborated as well in the illumination of the Book of Hours of Joanna I of Castile and Philip the Fair, Add. Ms. 18852–.

Simon Marmion is an outstanding artist recognized for his sharp observation of nature and his intuition when capturing everyday life. His work delighted emperors, princes and dukes alike. In fact, the brilliant creative skills of Marmion both in his paintings and in his miniatures, unites in wonderful harmony the French traditions of the master Jean Fouquet, with the representations of the human form made by Netherlandish artist Rogier van der Weyden and Jan van Eyck’s naturalistic lyricism.

• The ornamental borders, the lavish decoration, and the numerous iconographic resources used throughout, make of this Book of Hours a precursor work and one of the most significant works of art of the end of the Middle Ages.

• This codex, also known as Voustre Demeure, originally belonged to Margaret of York, sister of King Edward IV of England, and wife of Charles the Bold, Duke of Burgundy. They became the parents of Marie of Burgundy and grandparents of Margaret of Austria and Philip the Fair. Charles the Bold was thus the great-grandfather of Charles I of Spain (Charles V of the Holy Roman Empire). It seems that the Emperor Maximilian -Marie of Burgundy’s widowed husband- gave the codex to Ferdinand and Isabella of Spain, on the occasion of the double marriage of their children, Margaret and Philip, to the Spanish rulers’ offspring, John and Joan.