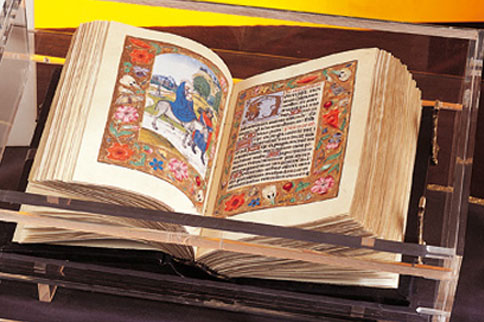 Illustrations:
84 miniatures illuminated in gold and silver by Gerard David.

• Contains numerous images decorated with floral, animal, fruit, and architectural motifs as well as medallions, all in vivid colors on a gold background, forming an impressive polychromatic group.

• The Borgias: History and Legend:

The more than 100-year history of the Borgia family is, without exaggeration, an odyssey difficult to imagine if it were not all true: a family of minor Valencian aristocracy that in less than half a century provided the Roman Catholic Church with two popes, Calixto III and Alexander VI, and a dozen cardinals, establishing a power base there for many years. Its children married into royal families and the Borgias became protagonists in Italy’s power struggles, inciting a series of infamous acts never again witnessed by the papacy. It finally closed this incredible circle by producing a great saint, Francis of Borgia, General of the Company of Jesus, at the height of the Counter-Reformation.

• Conserves its original binding, produced in Bruges by Antoine de Gavere. Bound in leather over wooden boards with bronze hinges and clasps.